I won’t spend a bunch of time on the post for NWE, only go over the highlights…

Oil production in the United States is rising dramatically. Couple that with ever increasing production out of the WCSB and limited refining capacity has created a condition where Western Canadian Select trades at a massive discount to WTI. Over the last 12 months oil transport by rail has increased dramatically to compensate for Alberta oil being land-locked. I think this is a trend that continues until pipelines are eventually built. Several Alberta based projects just got the green-light. And I also think that production in the U.S. continues to rise. I mentioned most of it in a previous post. I wanted to find out who would benefit and build a basket of a few names. I ended up looking for companies that met the following criteria:

NWE made the cut even though it has only really earned sustainable economic profit after 2011 with the acquisition of Bearstone from Newalta. This is when the newest (Kerkhoff) CEO took over after the previous CEO stepped down. At the same time William Rand (director) purchased 15% of the company. The current CEO owns a little more than 1x salary in common stock. 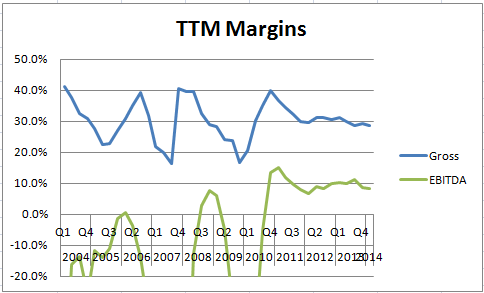 You can see the company turning into something sustainable in late 2010. I get about 20-25% ROC over that last 3 years. So it looks like they are adding value.

I should mention that the last few acquisitions have been paid at a reasonable price. There are opportunities for these little companies to move the profitability needle without having to shell out a ton of cash or pay a huge premium price to gain critical mass.

Another note is that in June there was a bunch of warrants that expired that would have been extremely dilutive.

I should be able to post the other ideas in the coming weeks.

Recently our Premier went on TV to warn the public of a “Bitumen Bubble” here. Essentially Alberta’s oil is landlocked. With limited pipeline capacity and increased  American oil production (primarily in the Bakken) the prices of Western Canadian Select has decreased relative to the more traditional Texas Crude.

You can see from the video that the Albertan government was caught flat footed. They push blame to the Canadian government for poor forecasting. To me that’s like myself passing blame to an analyst for me losing money on an investment.

The Edmonton Journal does a good job visualizing the situation here.

Aside from that, the government was not alone in being caught off guard. Yours truly wasn’t paying enough attention to the potential impacts for my investments and (more importantly) career. Many companies have been cutting spending which has led to lay-offs. My company alone let go of 15% of the workforce. If you consider what the expectations were at the start of 2012, we are talking closer to 25% less staff then expected. It’s huge.

Many Albertans are still ignorant to the effects. It is actually quite amazing how little we know about what drives our economy.

Here in Alberta it is nothing new to have the price of Western Canadian Select differ slightly from West Texas Crude, but recently things have been quite interesting. Alberta production has finally started to climb and many (if not all) projects need to produce to lower the overall cost of production, even at $50. Here is a look at Alberta production courtesy of ERCB. Shown are the barrels per day.

Unless a pipeline (or even a massive rail line) is built then this phenomenon is likely to continue. The longer it continues, the further down the economy will go. The other concern is how much of Alberta’s seemingly cheap Residential Real Estate market is because it is being propped up by high wage earners in the oil sands. The potential for a domino effect is scary.

There are several ways to play this from an investing (more like speculating) standpoint. Many companies are heavily exposed to drilling activity here in Alberta. The easiest picks would be producers, but with high debt loads you would have to be very precise on timing in order for them not to do damage to the balance sheet and for earnings to rebound.

An alternative would be the drilling and service companies. This would be my preference. Many have stronger balance sheets, though some are very levered. To be clear, I do think that the only competitive advantage any have would be those that are run conservatively. Most (if not all) drillers and service companies have been increasing the amount of capital expenditures and now (for the first time since the recession) there is likely more supply than demand. This is pushing down gross margins.

The final alternative would be companies that provide some sort of service or product beyond the obvious, like mobile trailers to drilling sites or catering services to camp sites.

I don’t have an idea why so many of these debt heavy cyclicals pay dividends, I am a little perplexed. Many could continue though I think they shouldn’t. Maybe the nadir for the sector would be the cut in dividends. I don’t know how much of that is priced in at this point, but it would likely lead to some large institutional selling.

The last type of company to purchase would be one that will benefit from new pipeline development directly. I don’t have any names, but I am looking. Please send some names if you have them.

I lay out the case to not immediately buy, but to scale into names when we get an announcement on pipeline or some sort of solution that oil from the WCSB will no longer be landlocked. Many have little or no analyst following, which tends to lead to a sleepy Mr. Market. I have intentionally picked more conservative companies for extra margin of safety. They may or may not rise as fast as their peers in an oil price spike. All names are Canadian listed. Many have exposure outside the WCSB as well.

Here you can find daily quotes for WCS from Suncor. Or here at the CME site.

Something I wanted to point out was the fact that I didn’t rant about our elected officials and how dumb it is to rely on oil and gas resources to be our main value proposition to the world. You’re welcome.

Disclosure: No position in anything mentioned.