Happy Canada Day to my fella Canadians and Happy Independence Day to my friends south of the border.

I use TIKR to quickly look through ideas and check comparable companies. Would recommend. Referral code below.

Really nothing new to report here. There is a still a debate on whether or not the spike is transitory or not. I don’t know. That’s it. Most commodities have rolled over to some degree, except oil and nat gas which have been strong. It will be interesting to see how long or to what degree we reopen if there is still 25-30% of adults with vaccine hesitancy.

Looking at my portfolio at the moment… I am looking to reduce the amount of companies I hold. I have too many small positions that are somewhat distracting given how much they will move the needle.

I really enjoyed this book and have been trying a few suggestions from the book. I have been scheduling my day in 30 min blocks that consist of either shallow and deep work. I have also removed much of my presence from social media. At least, I don’t check my Twitter timeline, but I will continue to utilize and check my DMs. I’ll give it a try for a month or so and see how it goes.

Hope everyone is having a wonderful summer and gets vaccinated.

Holy cow this month was busy.

I use TIKR to quickly look through ideas and check comparable companies. Would recommend. Referral code below.

Once a month I write in my investment journal to attempt to capture my current thoughts on the public markets. It’s not a forecast and I am not a macro guy. It is a quick snapshot of what is happening in real time and how I’m processing it.

This month I made note of Reddit and meme stock phenomenon. Also, layering on the uncertainty with covid and the lockdowns. For the first half of the month there seemed to be a record number of victory laps being taken and many are now regretful that they were not fully invested (or beyond fully invested) in tech/SaaS/WFH stocks over the last 6-9 months. On a personal note, I had never been trolled so hard from non-finance people for asking about risk when they mention hot stocks. The end of the month seen some of the market darlings (my proxy being ARK ETFs) look like they are rolling over. What I find interesting about this is that many of these companies could see their market cap drop by 60-80% and still be considered expensive by traditional financial metrics. I must admit I have had a harder time than ever staying on task and keeping on productive activities.

Hope everyone is staying safe. 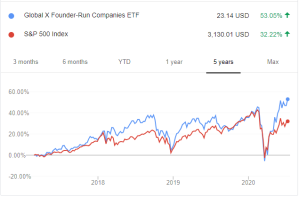 Well, I’m going to take a dive into a company that doesn’t quite fit that template.

Indigo Books & Music (mostly recognized as Chapters to Canadians) operates brick and mortar retail stores (almost exclusively in Canada) and an online store through indigo.ca. The company has been public since before the turn of the millennium. They merged with Chapters Inc in 2001.

The company CEO is the founder of Indigo since it’s inception in 1996. I’ve owned IDG in the past and made (a wee bit of) money. I still loosely follow out of interest.

The shareholders have had a bumpy ride to say the least. Shares are down 75% since they began trading and down about 90% over the last 12 months.

Bring a competitor to Amazon has not been easy for Indigo. They have had some periods of strength over the last decade.

Given how seasonal the business is, it’s best to judge operating performance on an annual basis. 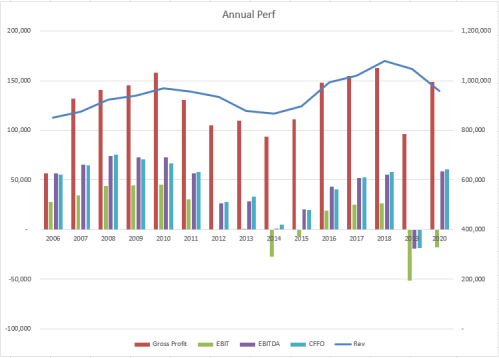 Revenue is on the right (secondary axis). This isn’t a compounder bro stock. 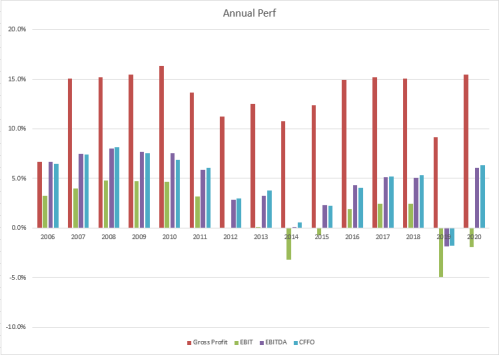 Going head to head with Amazon on price would be foolish. The company has had to pivot to remain as profitable as they have. They have had to close under-performing stores aggressively while promoting general merchandise in store as well as online.

As mentioned the store count has had to be rationalized over the years. 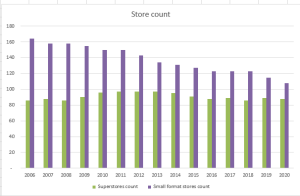 The large superstore count has been pretty flat while they have cut out net about 60 small format stores. Their total square footage is about flat from 2008 but it’s down roughly 10% from the peak in 2018. 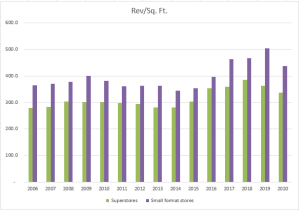 They have had some success driving revenue higher per square foot, but remember their annual results showed higher revenue in 2017, 2018, and 2019 although overall profitability hampered in 2019.

As mentioned they have been shifting to general merchandise from print. The strategy is to match (or closely match) Amazon on price with books and drive margin higher with general merchandise and experience in the store. They sold their share in Kobo in 2011 for $315 US. 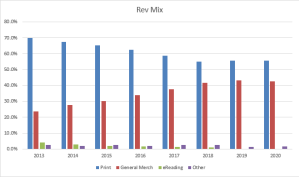 2017-2019 seems to be an example of driving revenue higher without an eye for expenses doesn’t work in this business. They spent much of fiscal 2019 and 2020 cutting redundant expenses cutting back on less productive promotional material, including repatriating a design studio from New York, while keeping as much margin as possible. They have gone from burning cash to generating it, or at least they did before covid hit.

Most of the board owns little shares. The CEO is also chair and personally owns 98,000 shares. Her spouse is also on the board and owns aver 50% (directly and indirectly) of the shares outstanding. A couple other institutions own around 20%, but they are less than 1% of their assets.

Many executives have a total compensation package of around 1 million per year. The CEO’s salary was 1 million alone in 2019.

They lost at least two weeks in fiscal Q4 due to covid lockdowns. The quarter was progressing quite well before the shutdowns and they feel they were on the path to sustained profitability. This is among the hardest hit with the lockdowns and the effects will linger for awhile. They had around 120 mil in cash at the end of Q4, which in prior years was criticized as too much. Minimum lease commitment for fiscal 2021 is 67 mil. They are negotiating with landlords during covid and have decided that 15 small format stores will not renew leases after June 2020.

Since the covid lockdowns hit they are trying to manage the cash burn: (from most recent MD&A)

• ceased its normal rent payments as of April 1, 2020 and is in negotiations with its landlords regarding rent-abatements;
• assessed and leveraged applicable government business support programs for COVID-19, including the Canada Emergency Wage Subsidy;
• extended payment terms with many of its vendors and plans to reduce its inventory levels while maintaining an optimized assortment;
• implemented a cost reduction plan to minimize non-essential operating costs;
• reviewed the capital investment plans pre-dating COVID-19 to account for the widespread economic impact of COVID-19;
• suspended much of its planned marketing spend in the first half of fiscal 2021;
• reviewed its head office workforce model and commenced certain role restructurings;
• froze salary increases and elected not to pay discretionary fiscal 2020 annual incentive plan bonuses; and
• the Chief Executive Officer elected to temporarily forgo her salary.

Obviously looking at profitability metrics during the pandemic is probably not productive. They are likely to lose money for the next few quarters even with some forgiveness from landlords and assistance from the government, but I could be wrong. They will have to be nimble to navigate this climate without blowing up the balance sheet. Under “normal” circumstances they should be able to generate 70mil in CFFO before capex. I think maintenance capex is minimal in the business, but this doesn’t include lease payments.

Today they have a market cap of less than 30mil which is about half of tangible book value. To say that there are little expectations on IDG isn’t a stretch. There were no analyst questions on the most recent call. If they survive and things go back to normal this feels like a situation where they can earn their market cap today in cash in 2-3 years time. They could also have to raise cash at a very poor time.

If you do take a position, I would watch it closely and likely use a mental stop loss at which you dump your entire position. To me, this isn’t the company to put a large portion of your portfolio into. It does scratch the proverbial contrarian itch. I mean being a contrarian can be fun, but (for me at least) it isn’t always a constructive use of capital.

Anyone ever look at Indigo or any retailer? They seem to have a large community presence.

*the author does NOT own shares of $idg.to but may initiate a position.