It’s only been just over 3 months since I originally wrote about Command Center. You can check out the original write-up here.

Long story short, nothing has changed except I feel the thesis is slightly derisked after a decent Q2. Since mid-2016 the organization has been focused on right-sizing operations and the results are showing.

The company now trades at a market cap of 21.3 mil with 4.1 mil in net cash. They have bought back some stock and are looking at potential acquisitions. I estimate ttm FCF at just over 3 mil. Though the shares responded well to Q2 earnings, they are only back to where they traded in April of this year.

I believe that CCNI is a buy at this price.

Disclosure: the author is long CCNI at time of writing.

If you have been checking the “Portfolio” tab you would have noticed that I have a position in CCNI. I’ll give some thoughts on the company and hope to instigate some discussion.

Command Center, Inc. is a staffing company. The Company operates primarily in the manual labor segment of the staffing industry. The Company provides on-demand employees for manual labor, light industrial and skilled trades applications. Its customers are primarily small to mid-sized businesses in the wholesale trades, manufacturing, hospitality, construction, retail and auto auction industries. The Company owns and operates approximately 60 on-demand labor stores in over 20 states. In addition to short and longer term temporary work assignments, the Company recruits and places workers in temp-to-hire situations.

From 2007 to 2012 CCNI would bump around from being profitable to losing money, the recession certainly didn’t help and you can see the big drop in revenue from 2008 to 2010. The current CEO was brought in 2013 to turn around operations. And you can see the margin expansion taking place as the focus on operations took hold. Closing unprofitable branches, coaching the under-performing branches/managers, and strategically expanding location count drove margins higher.  Margins were at a record and the company was generating solid FCF. Focus shifted from day to day operations to expanding the footprint. North Dakota became 25% of revenue in 2014 and the future was looking bright.

A few things happened starting in late 2014 and early 2015 and hit margins.

Management did recognize the issues and put provisions in place to right size them. In the meantime, share price suffered. 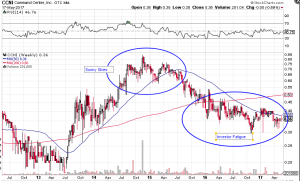 Through 2015 and H1 2016 comparable year-over-year results suffered. Investors became fatigued and some have been quite combative. Such things happen when expectations eclipse reality.

I’m not going to comment on the competency of management and what should or should not be done. Obviously, given that I have a position I feel I can trust them with my capital.

The last 3 quarters we have started to see operational improvements and better communication to shareholders. Recent (small) acquisition is delivering as expected and is an example of what the cash can be used for to grow the business.

CCNI now trades at around 8x FCF without any margin expansion. The CEO has clearly stated that he feels that 2017 will see higher revenue and margins. The low multiple and cash generating ability of the business will open up options to increase shareholder value.

Given the risk/reward profile, I think CCNI is worth buying under $0.50.

*the author is long CCNI at time of writing