I started this post in late 2016. Since then the company has released Q4 2016 numbers. Though not 100% up to date, all the arguments are relative today.

I will be the first to admit that I have had mixed results investing in oil and gas related names. I think it’s pretty safe to say that we are closer to the bottom of the cycle than the top, but who knows.

I have owned HWO.to in the past and was lucky enough to sell mid 2014. Recently I have been sniffing around the O&G services companies in hopes of finding a company that will not only survive the current environment, but be bigger and better for the next cycle.

I believe HWO is a great example of a company taking advantage of the downturn by purchasing assets on the cheap in a non-dilutive manner.

The majority of their revenue comes from Papua New Guinea (see below for quarterly revenue).

They own some high quality rigs in an environment where they have been able to keep several rigs utilized at any given time. PNG has been stable due to the large natural gas reserves and their LNG prospects. HWO has operated their for 9 years and built strong relationships with the major players. Admittedly, there is risk that the rigs in PNG are able to find work after their contracts are up.

For most part HWO’s Canadian operations have followed the overall business activity in Canada. Some decent Q’s, some lackluster and the typical spring break-up that’s associated with Western Canada.

This summer HWO acquired assets from TerVita. This including 85 rigs with various capabilities, rental equipment, engineering services, 5 owned locations, 300 employees and the right to use the legacy brand (which has a 30 year history in the marketplace). Apparently TerVita had too high of a debt load going into the downturn.

The thesis is quite simple. The PNG operations I think are worth at least the current share price. They have a handful of high quality rigs, equipment rentals, and of course their existing presence.

The upside comes from two places: 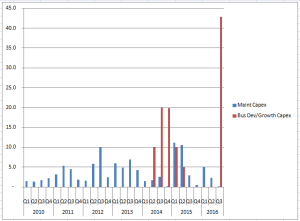 Market Cap and Enterprise Value are around $260mil. Using some assumptions, I think 40-50 mil in FCF is reasonable from operations. Making HWO trading at 5-7x FCF. Pretty cheap without having much contribution from Canadian operations.

Anyone else own HWO or finding value in the O&G market?