ZCL.to has some qualities of a good value stock:

Here’s something to get your blood pumping…

I love when a former growth stock disappoints and falls off the map. Top it off with a global recession and an less than liquid shares, and you have the recipe for a deep value investment.

That’s really where the value in ZCL ends. 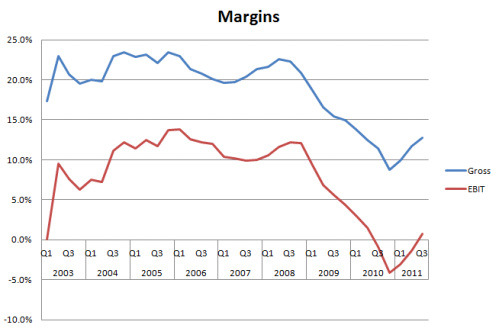 The two charts above show an average company that doesn’t really follow the economic cycle. That by itself isn’t really a worry. If the price is cheap enough, then you can buy almost any company.

There does look to be some mean reversion in margins going on. Though we are a long way from “average”.

My most aggressive fair value is for a return to historical profitability with revenue growth of 10%. This would give ZCL a DCF fair value of $4.50 or so. Current EPV and Graham fair value is $2.00-$3.00. Not enough margin of safety.

I would be interested if ZCL starts trading closer to tangible book or has some miraculous run in profitability coupled with a flat share price. Until then, I’ll wait patiently.

One response to “ZCL Composites”