This is a company that appears expensive on an earnings and asset valuation, but is actually quite cheap. I was first intrigued by PTZ.TO when it hit a new 52-week low earlier in summer. Here is a 1o year chart of PTZ. Every time it dips under $1 it looks like a decent entry point.

Pethealth Inc. (“Pethealth” or the “Company”) is North America’s second largest provider of medical insurance for dogs and cats to pet owners operating in Canada, the United States and the United Kingdom. It sells its policies under several different brand names using a model which includes co-branding, white labelling and private labelling programs with distribution partners. In addition, the Company is a leading provider of pet recovery database services in North America, a market it entered in February 2003 under the brand 24PetWatch™. Furthermore, the Company, through its web-based product, PetPoint™, has become the leading provider of management software to animal welfare organisations in North America, a market it entered in 2005.

The insurance segment is easy enough to understand. Through an MGA (managing general agreement) with some insurance providers PTZ earns a small amount of income for marketing, claims adjustment, premium collection, etc. They do have some underwriting risk in their US and UK operations, but none in Canada. I think the best way to value this segment is to average out some of the peaks and troughs and put a conservative multiple on it. 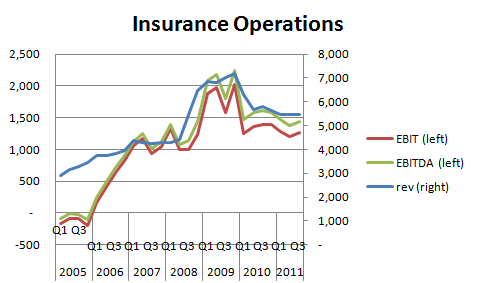 As you can see, revenue took off due to an acquisition to enter the UK market. Though the Canadian market is not necessarily strong, the US and UK market is really soft at the moment. A prolonged soft market is a risk to the insurance segment. I think that the insurance segment should be worth more than 4x EV/EBITDA. So at if I average the insurance EBITDA over the last several years and put a 4x multiple on it, I get around $0.70 as fair value. This tells me that there is little value being ascribed to the non-insurance segment.

Before I move onto the non-insurance segment, let’s take a look at the last 5 years from a valuation perspective. 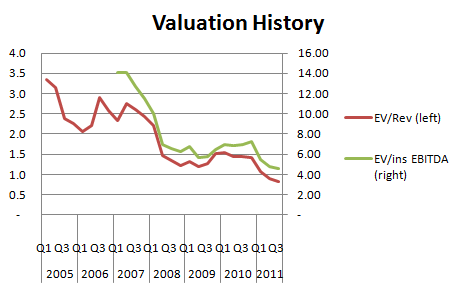 Since the insurance segment has turned EBITDA positive, the stock has slowly had a valuation adjustment downward. The revenue is on a consolidated basis. As you can see the company has never been cheaper. Looking back to the first chart, it appears that the company would have been too expensive to warrant investment as it was barely earnings positive. But that didn’t stop the market from building in high expectations.

Obviously there is a risk here. The non-insurance operations could be bleeding cash and/or the insurance segment will look dramatically different going forward. I will try to disprove this notion.

The insurance market is commoditized. However, there are unlikely to be many new entrants at this point in the cycle.

The non-insurance is made up of a few different businesses.

The microchip business which is really 24PetWatch RFID chips and database management. This is a low barrier to entry business, but the fact that the database is managed by Pethealth’s software is were they seem to have an advantage. Petpoint is offered for free to animal welfare organizations that purchase the RFID chips from Pethealth. This application is cloud based and allows for organizations to easily track any animal that has a Pethealth chip in it. PTZ is likely to represent 50% of the total adoptions in North America that come from welfare organizations. A fee based version will be available shortly with increased IT efficiency and agility. With the recent roll out of a new ERP, there has also been temporary margin pressure.

The other part of the non-insurance segment is petango. Petango.com is an online store that allows visitors to view real time data on adoptable animals. As PTZ expands their geographical reach they will be able to scale better with this business. Margins are also depressed from all the up-front costs associated with the website launch.

Obviously, all the different parts can be marketed to customers from its own unique value proposition. 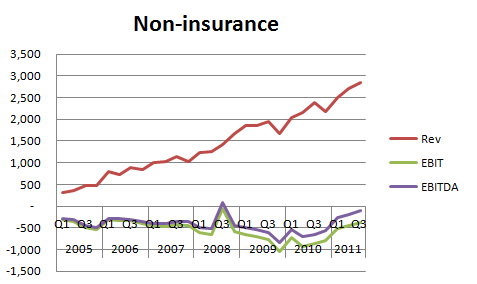 The segment is about to break even on an EBITDA basis. Though there have been a few times where it almost broke even, but nothing that was sustainable. I believe that the segment has enough synergies and traction to actually turn to a profit in 2012. The ceo feels that 2012 will finally be the year that they make money on the non-insurance side. There has been a huge increase in expenses and intangible assets on this side of the business that is now winding down, this should support margins going forward.

As you can the downward trend in expenses. This combined with increased revenue will drive profitability in 2012.

You didn’t think there wasn’t any did you? Of course there are risks here. If you buy PTZ, you are buying a premium to book. And lots of that book value is in the form of goodwill and intangibles. It may not be worthless, but it is tougher to value than hard assets.

You could also get an extended period of tough insurance environment that will eat into the margin of safety. The non-insurance side could also not execute as planned. Though the stock may not drop precipitously, it could end up being dead money.

In 2002, the ceo was loaned money from the company to buy shares in the open market. He did indeed buy them, but at a poor time. The loan was a 10 year loan that is will be due soon. Since the shares are under water and the company is just starting to gain traction, I think the terms will just be extended.

The company is raising chip prices in 2012 for some customers.

The company has the ability to to pre-fund some of its expansion plans with PetPoint. It collaborates with shelters to show them the benefits of Pethealth’s program. This first tranche of expansion included 55-65 organizations. It bodes well for future expansion plans.

PTZ has the ability to sell some of the massive amounts of data it has gathered from its partners.

There isn’t a close competitor that services all the different points of the pet ownership market, so I don’t have any company that I can use for relative valuation.

The ceo and chair own 20% of the company together. This should help align incentives between shareholders and management. Though compensation is a little high for my taste, but where isn’t it?

I have a hard trigger at $0.75. At that price I don’t think you are paying anything for the non-insurance segment. With a near term catalyst, I think I can find room in my portfolio for PTZ.

Disclosure: The author is long PTZ at time of writing.