Despite the recent “pullback” the market isn’t offering any low hanging fruit for deep value investors. I find in tough to find really cheap companies without the too much risk. Expectations are quite high, even though QE2 is ending and we don’ really know if the economy will support itself. Maybe my mind is too anchored to the panic of 2008-09.

For those who haven’t heard of them, this is from their website:

“We are a supplier of a comprehensive line of electronics and hardware for the cable television (“CATV”) industry (both franchise and non-franchise, or private cable). Our products are used to acquire, distribute and protect the broad range of communications signals carried on fiber optic, coaxial cable and wireless distribution systems. These products are sold to customers providing an array of communications services including television, high-speed data (internet) and telephony, to single family dwellings, apartments and institutions such as hospitals, prisons, universities, schools, cruise boats and others.”

The first thing that jumps out at you is the amount of inventory and how low the inventory turns are. I will do my best to minimize the inventory risk. Management has even said that their biggest risk is inventory. The reason that AEY carries so much inventory is that they feel they can supply a certain niche. The stock old, new and refurbished components. Their relationships with suppliers and customers are important to prevent the inventory from becoming obsolete. This is part of their “On hand, On demand” motto.  According to management, the older inventory is not available from OEMs so AEY supplies it as part of just maintaining existing infrastructure rather than being forced to upgrade to the latest and greatest component. They carry the largest amount of inventory of resellers. They also do this because many of their customers will pay extra for the same day delivery.

As the chart show, inventory turns has been volatile. It was quite a bit higher in 2005-07 before falling off a cliff in early 2008 and finally bottoming in Q1 2010. With inventory representing over 50% of assets in all of the last 7 years we have to be careful. The inventory turns are more a function of lower sales than anything. That doesn’t mean that AEY doesn’t belong in my portfolio, but extra attention to inventory is required.

The first check I did was their auditor, Hogan Taylor LLP. They are not one of the big 4 (like that matters). The other companies that they audit have not run into any problems with misstatement of earnings. I could only check a few though. In addition, the Auditor’s Report gave the company a clean opinion. Neither piece of information provides conclusive evidence that inventory balances are “OK”, but at least they provide some comfort. If either of these findings were different, I would stay away from this company.

So we can see that most of the inventory is classified as new with only 2006-08 having a higher than normal amount of refurbished inventory.

Recent moves have reduced the level of inventory to free up liquidity. Inventory is also lower than in the boom years as their customers are only maintaining current infrastructure not building anything new.The amount charged to expenses is interesting. If the company is taking write-offs larger than the amount they charge to expenses then they are under reserving. What jumps out is the dollar amount that is charged to expenses has risen dramatically. Other than in 2006 and 2007, the write-offs have been smaller than what has been charged to expenses. But there are still write-offs meaning there may be some signs of obsolescence. The allowance is now the highest it has been, both on an absolute basis and as a percent of total inventory. It is now 9.5% of inventory versus 5-6% historically. This is even though the majority of inventory is “new”. The high allowance will likely show up in increased GAAP earnings, if there are no more write-offs, as these have already been charged to expenses. The acid test ratio, (cash+short term investments+accounts receivable)/current liabilities, is almost 3, it has been as low as 0.70.

Let me make it clear, if management wanted to mislead investors with false inventory numbers, I don’t think there is anything I could do to catch it. If they are smart enough, they will be able to food the auditors as well. This is why it is important to have executives to have skin in the game.

Their latest investor presentation says they want to increase efficiencies by getting a fully automated inventory management system. If this is implemented (and there are no write-offs) then this could be a catalyst for the market to trust the financial statements a little more and price AEY at a premium to tangible book value.

There has been some chatter on the other posts as management being unfriendly to shareholders. I don’t see this. There are some related party transactions, but they don’t seem to be unreasonable. The company pay rent on a building owned by insiders, but the rates seem reasonable compared to the other facilities they lease.

Compensation is always a tough subject for me. I honestly don’t know what is fair and what the best way for management to be compensated is. Executive compensation consists of two parts for AEY: base salary and performance based bonus. Salaries may be a little high, they are around 270k. But there is a bonus plan that can have total compensation run well above 400k. The bonus is based on EBIT gains, which is better than revenue, and encourages a better capital structure if required. Last year total compensation was 360k.

Insiders own about 70% of AEY. This helps put some of the inventory risk into perspective. Knowing that if I go broke so does the CEO lets me sleep a little easier at night. The CEO and chair have 20x their compensation in the company. It helps when the CEO said “we they chase profits not revenue” on the last conference call.

Another note is that growth has come through acquisition. The amount of goodwill on the books has remained the same (no write-downs) throughout the last business cycle. This is a positive sign.

As you can see AEY has historically traded at higher price to book, price to sales and price to operating earnings. I used EV for the sales, EBIT and EBITDA valuations. Though there was panic in 2009, we are sitting at the low end for historical valuation. There is almost as much cash on the balance sheet as there is debt. This hasn’t been the case until recently. Management has stated that they won’t retire their debt early as it is subject to an interest rate swap, and early retirement would mean a $1 million penalty. It should be noted that AEY has lower sales today than in all previous years other than 2003. 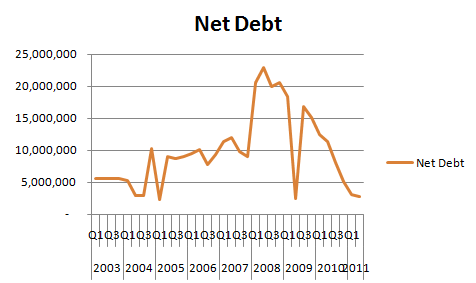 Despite the falling sales, AEY has managed to stay profitable. This is nice to see as a return to pre-recession sales is likely a long way away. 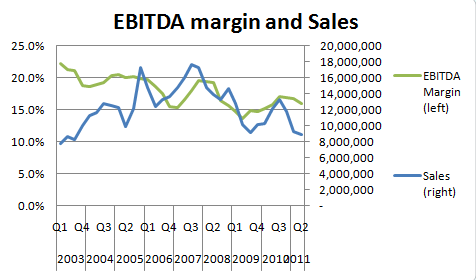 I have EPV, DCF and the Graham formula all over $5. This may be too aggressive but there seems to be a decent amount of margin of safety here. I think around $3 seems like a fair price to pay.

There has been a recent Cisco agreement that has helped reduce the amount of inventory that the company requires. This is part of a push by the company to free up some capital tied up in inventory. Under the agreement AEY will purchase Cisco products from a primary stocking distributor rather than from Cisco. This means there will likely be a decline in gross margins for Cisco products. The products purchased can only be sold to end-users in North America. This wasn’t what AEY was hoping for. I believe they were hoping to push the Cisco products overseas into Latin America were the older models of equipment would be easier to market.

On the positive side, AEY is now a premier partner and can also sell Cisco IT and SPVTG (Service Provider Video Technology Group) products. This may be a potential growth market of management can execute.

Given the strong ROC that AEY has (nearly 20%) and management team on your side, I think that a premium to book value is fair. Average price to tangible book over the last 7 years has been 1.52x or $4.96 for current tangible book value. Even using as average valuation to sales, EBIT and EBITDA, AEY should trade at least at $4. But again, previous sales were growing rather than slowly sinking like today. Management has stated that their customers are only maintaining current infrastructure, not expanding capacity.

Last quarters earnings were a disappointment, so expect volatility with this one. New home starts are a key driver for revenue.  Given how low expectations are, this seems like a decent opportunity in today’s market.

Disclosure: The author is long AEY at time of writing. For the record, I bought before and after last quarters earnings.