I like writing posts and getting feedback. I am trying to make PettyCash a blog for the everyday guy (like me). I also want my posts to be informative. I don’t want to write 3 sentences and then link to someone else’s hard work. This is and always will be a blog meant to inform. Through my successes and failures, I hope that at least one person (other than me) can learn something.

Everyone has benefited from the increased level of feedback on the internet. Whether you need information for a hotel in a distant location or product reviews on a specific company’s website, the feedback helps consumers’ make choices about products and services. Sure, some of the comments are useless, but many are useful. I have made 2011 a year were I start to provide feedback.

I have been debating for a few months whether or not to write a post on the real estate market from my vantage point. I wanted to make this as factual as possible, and not rant. I will not share my thoughts on real estate agents, mortgage brokers, or a financial institutions contribution (or potential lack thereof) to the economy as a whole. This is the closest you may get to the real estate scuttlebutt from Joe six-pack. I will stick to Alberta, specifically Edmonton. If you are looking for stock ideas, skip this post!!

Edmonton had a major housing bust before. The last time oil prices took flight, the 1970s, Alberta’s economy boomed. See the chart from http://edmontonhousingbust.com/. The previous boom was during a period of higher interest rates. The eventual collapse was during a period of slowly falling interest rates. This may have cushioned the fall. The biggest part of the collapse was due to falling oil prices. Expenditures in the oil sands are like a light switch, off or on. There seems to be little in between. 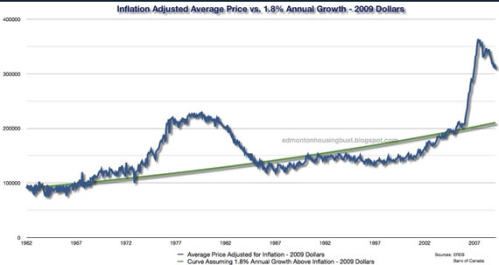 This time is different

You betcha!! This housing boom seems almost global in nature. The discussion today seems to be which housing market is in more of a bubble. Since 2008, the word “bubble” has been overused. The distinction between overpriced and bubble is tough to determine. It doesn’t really matter to me, as I refuse to participate in the speculation.

Debt levels are far higher today than they were in the last housing bubble. Low interest rates coupled with loose lending standards have driven housing prices to extreme levels. I am surprised by the lack of attention this gets in the media. We are at or near record debt to income in Canada and our households are vulnerable to interest rate shocks. I think a simple mean reversion in interest rates (and mortgage rates) will have damaging effects. Our leaders are focused on the next year (at most) and are not concerned by the ramifications of a high debt load. Going from a 5% mortgage rate to 7.5% is a 50% increase in debt service costs, all other things equal.

A disproportionate amount of money comes from Alberta’s oil sands. Despite businesses and governments attempt to “diversify” away from oil sands revenue, the effort have been muted so far. You would be amazed how many businesses is a direct spill over of the oil sands. Whether it’s a car dealership, web design company, or construction projects; they are almost all from the effects of the oil sands’ expansion. Again, our population seems to think that the oil boom will go on forever.

I am not an expert on oil, but I do know a thing or two about cars. The modern internal combustion engine is far superior than it was 20 years ago. Though the same design has been used for over 100 years, things have become quite a bit more efficient. Things like continuously variable transmissions, multiple cylinder displacement, and hybrid technology have significantly increased fuel efficiency. Even as our vehicles have generally increased in size and are friendlier on the environment. Simply reducing weight, using diesel combined with hybrid technology will further increase our vehicle’s efficiency. Natural gas can also be used, but would require more retro-fitting compared to diesel. Eventually electric cars will replace our current ones, but that use of coal to generate electricity is another debate.

To be clear, I am an oil bull. But you have to be realistic. Oil can only go as high as people can afford it. Let’s not forget that. Too high of a price will force innovation, and many current oil bulls will be bullish all the way to the bottom.

Though many sectors of the economy are still at higher unemployment than before the recession, oil and gas service has been hiring hand over fist. There are once again talks of a labour shortage. Many workers are working the equivalent of 1.5-2 jobs. With overtime and shift work, the average salary of a tradesperson on a job site is at least 120k a year. This is on the sites, not working in the city. Many people have moved to Alberta from other parts of Canada for work.

There have been fortunes made by many, as they were smart about the boom. Many turned their life off for a few years, and bought a couple of houses before the market really took off. Many average people with little education have a net worth over a million dollars. They were able to benefit from the boom. Many more though are trapped. Either people who didn’t go through the last downturn or forgot it, are stuck living a lifestyle that is only supported by these higher wages. They usually have one income, several kids, a 25 year mortgage on a 500k+ house, 2 new vehicles (one is for sure a big truck), and little understanding of economic cycles. They will probably be worse off because of the boom.

The biggest fear is the amount of confidence in the housing market. Many employees at my workplace own 2 or 3 “investment properties”. They are still confident that they made the right choice. Many more had owned houses for more than 20 years and think they “timed” the boom and are now smarter because of it. Remember that many of these workers (though not all) blame the city for potholes every spring. After all it’s not like we Canadians are anything like the Americans and their crazy housing market.

I’m not going to tell you what prices should be. Just they should probably be lower. If I put on my speculators’ hat, I would say that house prices go 10-15% lower from here. Or maybe they go sideways and inflation picks up. I don’t think there will be a crash unless oil falls below $50/barrel for an extended period.

All of this doesn’t consider:

You may be wondering why I would do a post like this out of the blue. A couple of weeks ago I had a cousin visit who is employed by a company to help people invest in real estate. I haven’t seen her in a long time and the visit had nothing to do with her job. She has been doing this for 10 years all over Canada and the U.S. She basically calculates the total cost of borrowing and renting out the house, and tries to meet a hurdle rate of return. It was a pretty simple calculation, even for me. I have no real opinion on the value that her services add.

I asked her what she thought of the market in general and what her expectations are going forward. She just said that prices are attractive. She then said that her company doesn’t factor in appreciation in real estate for extra safety. I said that there are many moving parts here for a simple sheet; like rent prices, taxes, interest rates, etc. I then said that at these prices in Canada she should be factoring a price decline to be safe. I mean nothing goes up forever.

To be honest, I am kind of grossed out by our leaders (both government and corporate) in their lack of response to this issue. I don’t know what a declining real estate market will have on the economy, but I would rather it be choked off now. I am too young to have been around for the last housing downturn, but my father has told me about it many times.

I still can’t believe that we Canadians think our market is “stronger” or “less risky” than the United States. Our high prices don’t have to be born out of some super sexy new financial instrument; we are more “boring” and “conservative” here in Canada. We can create an overpriced market the old-fashioned way.

I bought my house in 2004, before the majority of the run. It is 50+ years old. I put 25% down and will have in paid off in 3-4 years without any real extra payments. I have debated selling it and renting a house, but it doesn’t make sense for me. The market would have to crash in a short period of time in order for me to justify the move. Rent prices have also increased dramatically here. In order to rent out an equivalent home I would be looking at quite a bit more money than my mortgage costs me. A friend of mine recently listed his house in Saskatoon; he can find a similar home to rent and wanted to lock in the price appreciation. I can’t say that I blame him.

Here is some more reading for those who are interested…

3 responses to “Housing Bubble in Canada??”