Being that this recession was my first to experience as an investor I think I fared pretty good. I have a pretty easy time thinking long term, but I noticed that is not what the financial media wants you to do.

Zungui Haixi reported numbers about a week ago. Everything seemed OK. Major expenses as part of their growth strategy. Large increases in revenue from new stores opening. Delays in production expansion. But hey, I don’t invest for only a quarter or two. I don’t think that anything has changed with my original arguments. 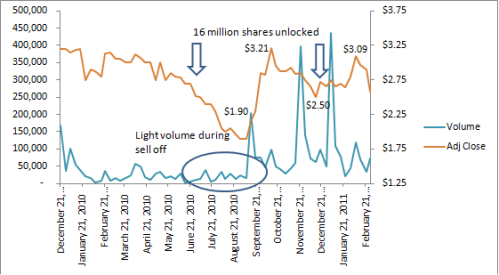 ﻿﻿Above is a chart on the history of ZUN. The scale on the left is volume and share price on the right. There was 16 million shares unlocked in June 2010 and another 16 million shares in December 2010. These shares were locked in as part of the agreement with the offering. June led to a sell-off that took ZUN under $2 with light volume. December did not follow suit. Note that major insiders have not sold, but have actually increased their stake (though not dramatically).

There are still many risks with ZUN…

I don’t think that there have been any real missteps yet, but we are dealing with a company in China. Corporate stores have higher margins, but they also tie up more capital.

There are  quite a few options exercisable at $3.25.

As with a retail company undergoing a major expansion, watching revenue/store is key. We want only profitable stores opened. But we must give the new stores at least 2 quarters before determining whether they are “underperforming”.

Management believes that capacity expansion is a must. I am on the fence. As per their reports, outsourced products have about 1% lower gross margins. They will invest quite a bit of money to build the 10 storey building; I hope it is worth it.

Another big risk is the cash balance. As with many of my investments, there is quite a bit of cash on the balance sheet. I hope it gets put to good use. A dividend or buyback later this year would help.

Management doesn’t seem overly concerned with their valuation. The NCIB is for 5% of outstanding shares. It would be nice if ZUN was more opportunistic.

Disclosure: The author is long ZUN at time of writing.