I have held shares in MCB for about a year now, and what a difference a year makes.

MCB has done a good job of participating in the rebound of capital spending in the global energy markets, particularly here in Alberta. I work in the oil+gas service sector, so I felt comfortable with MCB. My plan was to pick a company that was cheap and had the potential to appreciate when money started pouring back into the energy markets. I don’t mean the share prices of Suncor and Encana, I mean when the major firms started spending again. This is where MCB gets their revenue from.

Last year, MCB’s management was very cautious about the future. Oil was around $70-75/barrel (double from its lows), but spending in the oilsands hadn’t picked up materially. I wasn’t until Q3 2010 when the announced  capital spending projects really started to show up for MCB.

More importantly than price is stability. If oil stays at $90, eventually you will see more spending in the oilsands than if oil was to shoot up to $150, then back down to $75. Stability gives management the confidence to go ahead with those massive capital intensive projects. Here is a 3 year price chart of oil.

Here is a one year chart of MCB. 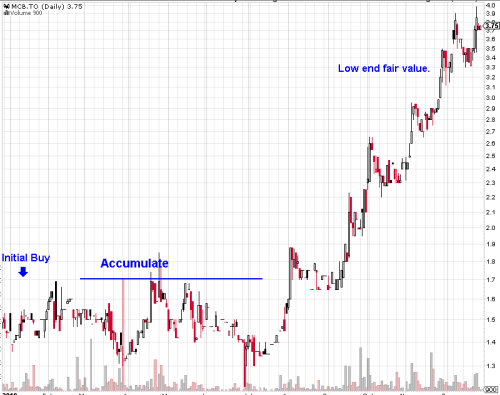 I wish all of my picks looked like this after a year, but they don’t. With MCB ploughing through the low-end of my fair value range, I need to revisit the position.

The chart shows how illiquid MCB really is. Small trading volumes can really move this company as there seemed to be a large accumulation of shares.

Deciding when to sell cyclicals is tough. If we are in a secular bull market for oil then not only will the earnings of MCB have a significant tailwind, but so will valuations. I don’t know if we really are in a secular bull market, but I know we are a long way from replacing fossil fuels as our primary source of energy. At $1.50 or less, I wasn’t paying for any real growth, just some mean reversion. At $3.50+, you need growth to justify the price. That growth may happen, but I don’t like paying for it.

As I said, I work in the oil+gas services sector. I have an advantage as to when a slowdown hits, though I wouldn’t use that alone. I guess one could equate it to Buffett counting the rail cars in the train yard.

Since having a net cash position, MCB has announced a dividend. Nothing big (1% yield), but it is a start. The dividend is likely to increase substantially from here as the recovery takes hold. This is a positive sign as management seems to recognize that cash in my hands is better than cash on MCB’s balance sheet doing nothing.

There has been no insider buying or selling.

We can speculate as to a fair price for growth but I am not sure how relevant that would be. MCB hit an all time high of $9.00 in 2006. We are a very long way from those earnings though. If the secular argument is true, then $9.00 might seem reasonable, but that was over 5x tangible book value. At 5x tangible book value, you get $9.65 fair value for MCB. I would consider that a very aggressive growth fair value.

Summary and Plan of Action

Management is confident that 2011 earnings will be higher than 2010, how much higher, I don’t know. There has been a huge move in the stock. We value investors always seem to sell too early, and I must get used to that. I was able to get almost 10% of my portfolio in MCB before it started its run. It is now around 15% of my portfolio. I am uncomfortable with that much exposure at current prices. I will par back my position and look for other opportunities. I will keep 5% of my portfolio in MCB unless there are some other screaming buys in the energy sector (that I can understand).

I just wanted to point out that this is post number 20. I have just inserted my first image. Some things I can pick up right away, others I struggle with. I will give myself a gold star for inserting the image (it is a pretty big step for me).

Disclosure: The author is long MCB.to at time of writing.